skip to main | skip to sidebar

I've been pretty slow in posting news on this blog for Rose City Quilters - just as well they aren't paying me, eh?
July was the Club's birthday month and the club members were the entertainment. Each selected a roll of thread and later formed a group with others who had the same colour thread. This way everyone gets mixed up - a way of meeting new people! Each group had a bag of bits and pieces and had to create an ensemble of wearable art. 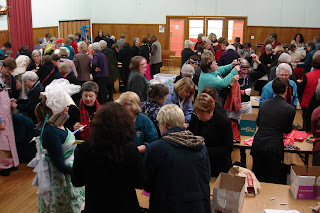 This is the hall where everyone is madly creating (after all there was a time limit!) Prizes were awarded for such things as: every piece supplied used, the best shoes, the best bag, the best ... you name it, there was a prize, so that everyone won.
Here are a few of the finished wearable art pieces: 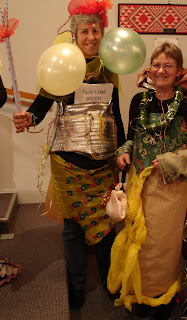 Congratulations, and a fun evening was had by all!
Posted by Erilyn at 8:53 PM No comments:

Every 3rd Saturday of the month at the Awapuni Community Hall in Newbury St from 9.30am – 4.00pm.

Rose City Quilters members are welcome to meet for a day of sewing and sharing.

More information in your newsletter.